The Middle East Still Matters – Even for Global Britain

British foreign policy is in the midst of a reset and reorientation phase, particularly in the Middle East. As the world slowly and uncertainly emerges from the Covid-19 pandemic, the UK is trying to define its new post-Brexit role in the world. The government of Boris Johnson talks of ‘Global Britain’ and its desired ‘Tilt’ towards the Indo-Pacific. But what this means for British policy towards the Middle East remains unclear.

The idea that Britain’s engagement in the region needs recalibrating is not new. Before the Brexit vote derailed his premiership, David Cameron hoped to make a new Gulf Strategy one of his signature foreign policy initiatives. The era of regime changing interventionism, defined by the Iraq invasion and the Libya intervention, was supposed to be left behind. Instead, the UK wanted to re-establish itself ‘East of Suez’ and once again become a power to be reckoned with in the Gulf. The plan was to contribute to regional security and – most of all – expand lucrative trade and commercial relations with the wealthy Gulf monarchies, while navigating thorny human rights issues with diplomacy and by leveraging British soft power.

Yet, by the time Cameron’s successor Theresa May launched a pared down version of the strategy in December 2016, Britain – and most of the British policy-making apparatus – was already occupied with the Brexit negotiations. All eyes were on Brussels, not Riyadh, Abu Dhabi or Doha. Over the following years, Britain was perceived to be largely absent from, or only tangentially engaged in many of the main issues of the day in the region – from the Gulf dispute between Qatar and its neighbours, to the violent conflicts in Libya, Syria, and Yemen, and the popular protest movements in Algeria, Iraq, Lebanon, and Sudan. And that was before Covid-19 spread across the globe.

Last year’s Integrated Review signalled that the UK would prefer to pay less attention to the Middle East, and instead follow the US example and concentrate its efforts on the much further away Indo-Pacific region.

Now that Brexit is done, and the worst of the pandemic seems to be overcome, the questions of how Britain wants to approach the Middle East, what it wants its role to be, and what it wants to achieve, are re-emerging. Last year’s Integrated Review signalled that the UK would prefer to pay less attention to the Middle East, and instead follow the US example and concentrate its efforts on the much further away Indo-Pacific region. AUKUS, the new security alliance with Australia and the US.

Still, London cannot ignore the Middle East. Geography still matters: Despite Brexit, Britain remains part of Europe, and the Middle East is Europe’s closest southern neighbourhood with obvious implications for European – and British – security. Moreover, Britain’s most direct route to and from the Indo-Pacific leads through the Middle East via the Suez Canal and the Gulf. The memory of the Iraq War has made any involvement in the region an unpopular sell for British politicians, but if ‘Global Britain’ is supposed to be more than slogan, British governments – now and in the future – have little choice but to engage.

As a permanent member of the UN Security Council, the UK bears responsibility for resolving and preventing conflicts in the region. It cannot afford not to develop and at least clearly communicate its positions on matters such as the fragile political process in Libya, or the looming state collapse in Lebanon. Moreover, even for the most ardent proponents of a foreign policy driven only by what is good for Britain, the experience of the rise of Daesh just over half a decade ago should serve as a reminder that instability and war in the Middle East can give rise to threats that directly affect security in London, Manchester or elsewhere in the UK.

It is also clear that the UK on its own does not have the capacity or capabilities to be a significant security actor in the Middle East. Instead, it has to work with partners, both in the region and beyond.

At the same time, it is also clear that the UK on its own does not have the capacity or capabilities to be a significant security actor in the Middle East. Instead, it has to work with partners, both in the region and beyond. This of course includes the US, but Britain should also seek to build stronger post-Brexit partnerships with European powers engaged in the region, especially France and Germany. Together, as the E3, London, Paris and Berlin can play a constructive role in the ongoing negotiations to revive nuclear diplomacy with Iran, for example, and effectively support related regional dialogue initiatives.

In the region itself, the UK has many old friends. Bilateral ties, particularly with the rulers of the Gulf monarchies, often have deep historical roots. The Integrated Review rightly identifies Oman and Jordan as the UK’s closest partners in the region. Yet, these and other relationships need to be refreshed to reflect changing regional dynamics. Governments across the region are adapting to the shifting global environment. China (and Asia, more generally) has emerged as their economic partner of the future – and for some, the present. When it comes to national security, many still look west to the US and, to a lesser extent, the UK and Europe, but they are but they are also seeking to expand security relationships with Russia and China, and countries like Saudi Arabia, the UAE and Turkey have adopted much more assertive – and frequently competing – regional security policies themselves. The recent withdrawal from Afghanistan has only heightened anxieties about the reliability of American and European commitments to regional security. The UK needs to update its understanding of its regional partners’ concerns and agendas, and be clear about its own positions, interests, and preferences, if it wants to productively and strategically engage with them.

The economic interests that drove the Cameron government’s Gulf Strategy also still exists. After the European Union and the US, the GCC is the UK’s largest export market. The pandemic has forced the Gulf monarchies to tighten their purse strings. But as they face the urgent challenge of diversifying their economies while the world tries to wean itself off its addiction to oil, there are obvious export and trade opportunities for the UK, ranging from the financial services and education sectors, to green technology.

In fact, as Britain seeks to establish itself as a global leader in the struggle against climate change, it makes sense to focus on the Middle East. The region’s oil and gas producers will likely struggle more than most to decarbonise their economies and will look for support. At the same time, the effects of climate change – most obviously droughts and heatwaves – are already being acutely felt across the region. Ever hotter temperatures during the summer months could emerge as an existential threat to populations, especially in the Gulf region. In short, the Middle East is in urgent need of precisely the sort of bold climate change prevention, mitigation, and adaptation initiatives the UK wants to champion.

Ultimately, ‘Global Britain’ – or whatever other slogan future governments come up with to describe their vision for the UK role in the world – needs a new strategy for its engagement with the Middle East. The UK may not want to be as interventionist in the region than in the past – and rightly so – but even if it wants to do less, it must still define what it is prepared to do and how. One way or the other, the region remains the source of too many risks, but also offers too many opportunities, to be ignored.

Tobias Borck is Research Fellow for Middle East Security Studies at the International Security Studies department at RUSI. His main research interests include the international relations of the Middle East, and specifically the foreign, defence and security policies of Arab states, particularly the Gulf monarchies, as well as European – especially German and British – engagement with the Middle East. He also co-leads the development and delivery of the RUSI Leadership Centre’s programme of executive education training courses, including for diplomats, military personnel, and security professionals from the Middle East and beyond.
See all articles by this author 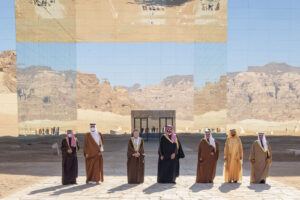 Islam as a Public Diplomacy Tool: The Turkish case The One True Sharia: A Historical Background