The Experience of MENA Immigrants as Minorities in France: an interview with Dr. Catherine Wihtol de Wenden

Dr. Catherine Wihtol de Wenden, Research Director at the French National Centre for Scientific Research and Senior Researcher at the Institute for International Political Studies, speaks about the history and current experiences of immigrants from the MENA region in France.

JEMIMA BAAR: Dr. Wihtol de Wenden, thank you for taking the time to speak with us. Could you begin by providing a brief overview of the history of migration from the Middle East and North Africa to France?

CATHERINE WITHOL DE WENDEN: France has a long history of immigration, which started long before other European countries. It began towards the end of the 19th century, after a period of French population decline and [a resulting] need to increase France’s labour force due to industrialisation, or what we call in French, ‘les grands travaux’. Many migrants came from neighbouring countries like Belgium, Switzerland, Germany, Italy, and Poland. However, they also came from Algeria because, as a French département until 1962, there was free movement of labour between Algeria and France.

We in France therefore make a distinction between immigrants to France from the Maghreb, who comprised mostly migrant workers and their families, and those from the Near East, such as Turkey, Lebanon, and Israel, and those from the Middle East, such as Iraq and Iran. Most migrants from the Near East and the Middle East to France were refugees. France has less of a tradition of taking in refugees from these regions, unlike, for example, the United Kingdom in the 1980s and Germany in recent years.

JB: That’s a very illuminating distinction and leads nicely into my next question, which is: what was the experience of immigrants from the Maghreb to France like?

CW: Most immigrants from the Maghreb post-1962, who largely came in two waves – the first, French settlers who returned to France after the Algerian War of Independence and the second, families of maghrebi workers in France, who became French citizens through family reunification policies – consider it possible to be both Republican while also being Muslim.

This has not always been easy, however: in 1983, maghrebis took part in so-called ‘marches des beurs’, which were marches for equality of rights and against racism. In the fieldwork I conducted with civic associations of second generation maghrebi individuals, the topic of citizenship was very important: they saw themselves as French citizens and wanted to have the same rights as other French citizens. In this time period, many civic associations were formed to push against institutional racism. These organisations also worked in the banlieues, or ‘inner-cities’, as mediators and advocates for public rights.

JB: The banlieues feature often when one reads about immigration in France. Could you speak a little more about experiences of MENA immigrants in the banlieues?

CW: After the period about which I have just spoken, there was a decline of the subsidies to these civic associations and therefore a decline in mediators and, progressively, a rise in the visibility of Islam in the banlieues.

Initially, there was a difference between the Islam practiced by second and third generation Muslims and that of their parents. In my fieldwork, I noticed that the Islam practiced by the first generation was very traditional and conservative, but also discreet: people practiced Islam but did not openly speak about it. That said, there was quite a lot of public recognition of Muslims in France: for example, after the First World War, a mosque was built in Paris to thank the Muslims who fought for France…

Foreign countries have increasingly influenced the practice of Islam in France.

… Since then, however, foreign countries have increasingly influenced the practice of Islam in France. Gulf countries have subsidised Muslim associations in the banlieues and encouraged a practice of Islam that is very different [to that of earlier generations]. As France is a secular country, [there is no state money for the practice of religion, so] religious communities have to fundraise for themselves. Given the wealth in the Gulf [it is no surprise that] they give money in France [with strings attached]. And so in France, two thirds of the mosques, Muslim associations, madrassas and so on are subsidised by Gulf countries.Yet, [one can still say that], many young French Muslims were still able to reconcile being Muslim and also striving for the ideals of liberté, égalité, fraternité; serving in the French Army, going to fight in Afghanistan, in Mali, and so on.

This is not a ‘radicalisation of Islam’, as some describe it, but rather an ‘Islamisation of radicalism’.

The difference has come with the internet. In my view, we have a phenomenon of individuals going to Islam to try and find violence in and through Islam. But this is not a ‘radicalisation of Islam’, as some describe it, but rather an ‘Islamisation of radicalism’. These people are not ‘Islamic’ — the religion has for long periods gone without any violence — rather, they are looking for violence, bolstered by their connections via the internet, and have found some legitimisation of their violence in Islam. But these people are a minority: in 2015, 1.3 million people came to Europe from the Near East and Middle East, but only a handful committed crimes in Germany and France, many by people who were second and third generation immigrants. The idea of ‘the Islamist terrorist’ is the discourse of fear constructed by those who fear. Now in public discourse, many people link the topic of migration directly with Islamism and specifically, Islamist terrorism, which is not the case for the majority of Muslim immigrants in France or elsewhere.

This rhetoric is very dangerous and may lead locally to a form of civil war in districts. It is very dangerous how individuals are manipulating this topic in order to gain votes, and this discourse has some success because [it echoes] themes that have long been present in the French extreme right, such as the so-called Grand Remplacement (or ‘Great Replacement’ theory). Often, the idea of an ‘invasion by foreigners’ confuses recent migrants with second and third-generation immigrants, many of whom are from départements of France, and have therefore been French citizens for many generations.

JB: This brings us to another topic of conversation: the current political climate in France. The French presidential election will take place in April 2022. In your opinion, does Éric Zemmour mark a new change or direction in French right-wing politics, or would you suggest that he is a continuum from Marine Le Pen and Le Front National?

CW: Perhaps he is closer to Jean-Marie Le Pen [than Marine] because most of his discourse is what we call in France ‘la provocation’. Their audiences are different but there are a lot of similarities in the type of discourse they speak… [and both commit] lots of factual errors in what they say about Islam and migration.

JB: What policy-related changes do you think need to happen to really mitigate this hostility? And you described it, France is almost descending into this nearly irreconcilable polarisation between Muslim communities who may be just trying to live their lives perfectly normally — there will obviously be fringe movements where there are some extremists, but that is the case everywhere — and then this growing right wing movement. What do you think should be happening within French civil society as well as on a political level to try and stop these tensions from inflaming even further?

CW: Thank you for this very interesting question. Most extreme right people have very few opportunities to meet the individuals [living] in the inner cities. So, most of these potential extreme right voters live more in the sphere of imagination… they imagine a future civil war and a Reconquista of sorts like in [medieval] Granada. There are very few opportunities for people [from these different sides] to actually meet together. Perhaps there is [also] some responsibility [on the part] of journalists. Marine Le Pen’s [views], for example, are very strongly represented in radio and on TV because they attract a lot of people.

When we speak about radical Islamism — especially during the recent trial over the Bataclan attacks — we need to be clear that all these people do not represent the majority.

We also need to be clear that this is a small minority of people. The majority do not think in this way. [Similarly], when we speak about radical Islamism — especially during the recent trial over the Bataclan attacks — we need to be clear that all these people do not represent the majority [of Muslims]. There [would be] a kind of change of society’s views and [the extent of the] divisions if we focus on these trends, which are very dangerous, but do not represent the mainstream.

Jemima reads Theology, Religion, and the Philosophy of Religion at Sidney Sussex College, University of Cambridge, where she is a Robert Johnson scholar. She studied Mandarin at Peking University between 2017-2018. She is a research assistant to Dr. Kun-Chin Lin and edits the comparative politics section of the Cambridge Journal of Political Affairs. She was previously the Executive Director of The Wilberforce Society.
See all articles by this author 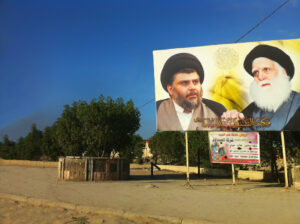 What to Expect When You Are Campaigning: France in the Middle East and North Africa in 2022