Women and Leadership in the MENA Region

Women in the Middle East and North Africa (MENA) region are more than ready to lead. They are highly educated; in some countries they are already surpassing their male counterparts in university enrollment, reaching 43 percent in 2019 in the region as a whole, up from just under 5 percent in 1970.[1] In many countries across the region women are holding ministerial positions, running for parliament and getting elected, as well as  representing their countries abroad as ambassadors and diplomats. For example, in Washington, D.C. today, where I live, Jordan, Morocco, Saudi Arabia, Libya and Oman are all represented by women ambassadors. In the United Arab Emirates, Dr. Amal Al Qubaisi made history by becoming the first woman speaker of parliament in 2015.[2] In Tunisia’s 2019 presidential elections, two women ran as candidates. This important progress should be noted. However, despite their readiness to lead and the good examples set by these women leaders, many believe that there is still a significant ‘women leadership deficit’ in MENA, not only in the public sector but also in the private sector. For example, women in MENA have one of the lowest rates of entrepreneurship worldwide, standing poorly at 4 percent.[3] However, this leadership deficit is true if we define leadership only in terms of positions or roles, rather than actions, whether those are in the public or private sectors.

If we redefine leadership as actions rather than positions of authority, we will see a completely different and more hopeful picture across MENA when it comes to women and leadership.

If we redefine leadership as actions rather than positions of authority, we will see a completely different and more hopeful picture across MENA when it comes to women and leadership. We often use the words “leadership” and “authority” interchangeably. However, emerging leadership frameworks, such as that of Ronald Heifetz at the Harvard Kennedy School, define leadership as an act or a practice. In his “Adaptive Leadership” framework, Heifetz argues that “authorities” have very specific functions and that their roles are designed to render services to a group with already set norms and direction. Leaders can be in positions of authority but they don’t have to be. They can exercise leadership from any place and they often challenge the norms in the pursuit of change.[4]

In the MENA region, women have certainly exercised leadership without being in positions of formal authority. Women have been at the forefront of the second wave of the Arab Uprisings we have witnessed in 2019 in Sudan, Algeria, Iraq, and Lebanon, where they were not only marching on the streets side by side with their male compatriots protesting corruption, injustice and state failure to provide basic services. They were also organizing, mobilizing, strategizing, campaigning and speaking up. In Lebanon, for example, women often formed a “human shield to protect protestors from riot police.”[5] In Sudan, Alaa Salah, the woman activist whose photo made headlines and became the fuel of the movement that overthrew President Omar al Bashir after nearly thirty years in power, told the United Nations Security Council last year that Sudanese women “led resistance committees and sit-ins, planned protest routes and disobeyed curfews, even in the midst of a declared state of emergency that left them vulnerable to security forces.”[6]

In Women Rising: In and Beyond the Arab Spring, which compiles essays by Arab women leaders, the editors Rita Stephen and Mounira Charrad wrote that beyond the role women played in the Arab Uprisings in 2011, women “have also infiltrated the contentious collective space en masse” fighting for “women’s rights and representation as parts of the larger effort to achieve greater political and economic reforms.”[7] Pressure and lobbying efforts have succeeded in changing many laws and reforming others across the region, such as removing Jordan’s Penal Code 308 that forgave the rapist if he married his rape victim, Tunisia’s parliament passing a law that eliminated violence against women, and Egypt passing legislation on sexual harassment in the workplace.[8] Women who fought for these changes have exercised leadership without being in positions of state authority. And the good news is, these successful examples will only fuel their resolve to continue harnessing the “power of collective action”[9] in the pursuit of change, especially given the myriad of legal, sociocultural and political obstacles that women continue to face across the MENA region.

Women’s advancements in exercising leadership at the grassroots and community levels in MENA does not replace the need and importance of having more women reach positions of authority and having a seat at the high table. The “deficit” we see in both the public and private sectors across MENA, with a few exceptions in countries like the United Arab Emirates and Tunisia, is a serious obstacle for the women’s movement pushing for change in the centers of power. However, as more women enter the public sphere with determination and resolve to make change, we are likely to see more openings for women’s political and economic participation at the top of the pyramid. Several studies have revealed that gender diversity at the high table translates to better problem solving, more transparency, and decision-making that benefits the whole community.[10] Indeed, the COVID-19 pandemic has showcased how the absence of women from crisis management committees across MENA has resulted in poor decision-making that affect women and families adversely. In Jordan, for example, a government decision to shutter all child care services did not consider the impact on working women. While the decision was later reversed thanks to a campaign championed by Sadaqa, a Jordanian women-led NGO, it is worthy to note that had more women been at the high table, such decisions were highly unlikely to be passed.  This and the many examples we have witnessed recently point to one direction: Women are more than ready to lead.

Merissa Khurma is the program manager of the Middle East Program at the Wilson Center. She was a non-resident fellow in the International Security program at New America. She has leadership experience working in a range of development projects in the Middle East that focused on economic development, the Syrian refugee crisis, education, youth, gender development, and governance. Additionally, Khurma served as director of the Office of Jordan’s Prince Ali Bin Al Hussein (2010- 2013) and as press attaché and director of the Information Bureau at the Embassy of Jordan in Washington, D.C. (2003-2010).
See all articles by this author 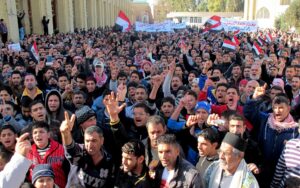 Algeria’s Hirak: Why Such a Mass Movement Achieved so Little