John Simpson: Around the World in 50 Years

The name John Simpson is synonymous with the most historic international events and he has been present at numerous events of historical significance: from flying on the same plane as Ayatollah Khomeini as he returned to Iran during the 1979 Revolution, to reporting within Baghdad itself whilst it was being bombarded during the 2003 invasion of Iraq. As a long-time foreign correspondent, he has developed a wealth of experience, expertise and contacts across the globe which allow him to keep abreast the latest international stories. As I talked with John Simpson about his journalistic career with the BBC, it became very apparent that his consistency in following the road literally less travelled to find the truth comes from a genuine and insatiable curiosity.

Focusing on the aftermath of the Arab Spring, Simpson argues that the “big shakeup in 2011” has meant that we have “retreated” in many ways due to the “chaos in Libya” and destruction of nations like Syria. Something he found surprising is that he had found people on the ground, throughout the Middle East, who reminisce fondly about “how good the old days were” which is “even true in Iraq where, under Saddam, life could really be quite nasty if you had any feelings of independence or criticism of the government in any way”. Even people who “would have always been critics of Saddam were saying that they ‘missed the old days’”, including “one or two Kurds”. These people did not “wish Saddam back but they wanted a little bit more peace and stability”. The same was true when it came to ideas about western democracy and “the mistake, that particularly people like me make is to assume that people want to be able to speak openly about politics” and although “some people certainly do, it isn’t widespread” and most people “prefer a peaceful existence to… an expressive one”. While speaking to Simpson, it was clear that his empathy and understanding of the precarious situations of different people around the world informs his analysis and enables him to escape his own frame and communicate the situation facing ordinary people in different circumstances.

However, Simpson’s reliance on international contacts clearly has significant drawbacks. He demonstrated his evident frustration that he “can’t nowadays talk about Iran because the BBC is utterly banned from Iran, I think we have only had three people around to visit just for the night because of the BBC Persian service which is offensive to the government in Iran”. He still has great expertise on Iran even though “his personal knowledge is about ten years out of date” and the only Iranians he communicates with are those in Tehran. He views Iran as “very different from any of the other countries around”. He suggested that this is partly because “you cannot be exposed to the kind of freedom you get on the internet without it affecting you very seriously”. His Iranian contacts, both in their twenties, are good examples of this: thanks to the internet they feel “mentally free” despite the restraints of the government. Access to the internet allows for the kind of intellectual exchange previously impossible in many authoritarian states and raises the interesting question – never definitively answered by the events of the Arab Spring – of the whether this would translate into freedom in real world.

According to Simpson, young people in the Middle East are increasingly abandoning traditional sectarian divides. While in Lebanon, he related, he was “really interested to see how younger people were… putting aside the labels” of Shia and Sunni and instead “simply uniting with the people that think like them and demanding an end to the old system and that is what is happening on a more or less daily basis”. This non-sectarianism is an interesting and novel change in the political framework of the Middle East and the way in which people conceptualise opposition to their governments.

Most recently, anti-government protestors in Sudan have been successful in overthrowing President Omar al-Bashir and handing him over to the International Criminal Court. Simpson is sceptical about the effect this will have on the wider Middle East, arguing that “if Sudan was closer to the centre of the Arab world I think it would have a big effect” but even though it probably will not, their success has been “quite heartening”. A theme throughout Simpson’s reportage over the years has been an ability to talk emotively and passionately about momentous occasions. He reported that he was in tears when he found out that Nelson Mandela had been freed from prison.

Although he hasn’t been back to Egypt in years, Simpson still has many friends there and “reads lot about it”. That said, he is not especially confident about the state of the country suggesting that it looks dangerously like a “return to pre-2011”. He added the caveat that when it came to the kinds of protests that erupted across the Middle East in 2011, “these things stay in people’s minds and they remember how to do it and what needs to be done” and so “if the conditions are right then that will happen again”. This, of course, should be combined with the fact that “Sisi and his government know how to stop it”. Simpson’s ability to analyse fraught situations, across the Middle East and North Africa, but unwillingness to commit to any kind of prediction about the future speaks to both his decades of experience and the incredibly unstable situation of the Middle East in 2020.

The fact that many authoritarian leaders are propped up by Russia and China is, in Simpson’s view, “a fairly ad hoc thing that comes from two directions”. The specific directions he went on to identify are Russian “diplomatic and military output” and “Chinese money”. ‘Chinese money’, Simpson suggested, is particularly prevalent in Africa, where people just “do what China wants” because they “pay off the top levels of government and also pour in money for infrastructure, which do change people’s lives for the better”. This has been made possible by the United States and Europe withdrawing and purportedly “seeming less interested” in many parts of the world. As to whether this continual Chinese influence in these areas will continue, Simpson is more sceptical. Nonetheless, whether or not China keeps up its influence, it is clear that Western countries will have to contend, at least in the short-term, with Russian and Chinese involvement in the Middle East and Africa.

When it comes to the future of Western action, Simpson was incredibly matter of fact: “I am assuming we are looking at four more years of Donald Trump [which] means another four years of which America is the centre of everything for Americans and the outside world does not get much of a look in”. According to Simpson, all of the European states along with the US have either been weakened or not been paying much attention to the outside world which is something that has led to the “quite effective” alliance of Putin and Xi Jinping. He outlined what he perceives as the key advantages the West have, like the “soft power” of the internet which has an effective “counter- attraction to the Chinese and Russian model” of society and governance. His reaction is one of mourning when I mention the BBC as the prime example of this kind of institution, stating “yes, while it lasts”. As he went on, it was revealed that he was “rather depressed about this [situation with the BBC”, due in part to the current Conservative government sending signals that they are sceptical about the BBC continuing to function as it currently does. Simpson has publicly defended the BBC and its output against this kind of criticism.

Finally, he responded with an emphatic “oh yes!” to the question of whether the West has become increasingly insular in recent years – going as far as to argue that “everything has changed”. Simpson’s example of this was the broadening of the idea of the region: he suggested that when people used to talk about “the Middle East”, they meant “Israel and the Palestinians”, whereas now they are referring to a much larger geographic area. Meanwhile the situation in the broader Middle East has changed in a way that makes it unique, as it has become increasingly divided between Saudi Arabia, under the influence of Crown Prince Mohammed Bin Salman, and the Iranians. What is equally interesting is his assertion that “no Western government seems to have a grip on this”. The way in which many are lining up behind Mohammed Bin Salman “despite what he has done” is clearly a development that Simpson sees as significant. This worrying sign is coupled with the fact that there are no more regional actors, since the death of Sultan Qaboos of Oman, who could bring both sides together in negotiations – in the eyes of Simpson, these people “don’t exist” at the moment.

Although Simpson has not yet met Mohammed Bin Salman – something which he says he is working on and has “got a bid in” – he has interacted with many of the most influential Middle Eastern leaders who often “start off quite well” and then degenerate into tyrants: “lots and lots of people who thought that they had a messianic role to play in improving the lot of the nation [end up merely] improving their lot and insuring that they can keep control and we have got back to that with different methods”. However, he did caution against people too quickly resorting to “wag their finger” at certain leaders, because according to Simpson these leaders are often trying to manage a very “slippery slope”.

In his talk, he combined a fairly pessimistic view of the state of international affairs post-2016 with a freewheeling and humorous question and answer session, drawing on stories and information around the world. Throughout the event his passion for being at the heart of the story shone – a fact which made his claim that that he would love to be in Wuhan to report on the coronavirus outbreak all the more believable, if still difficult to fathom. 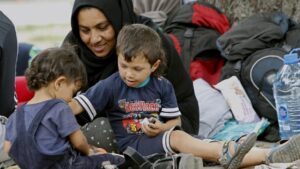 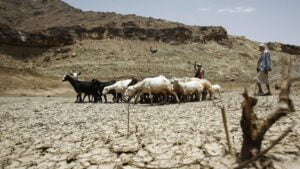 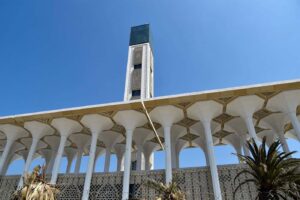