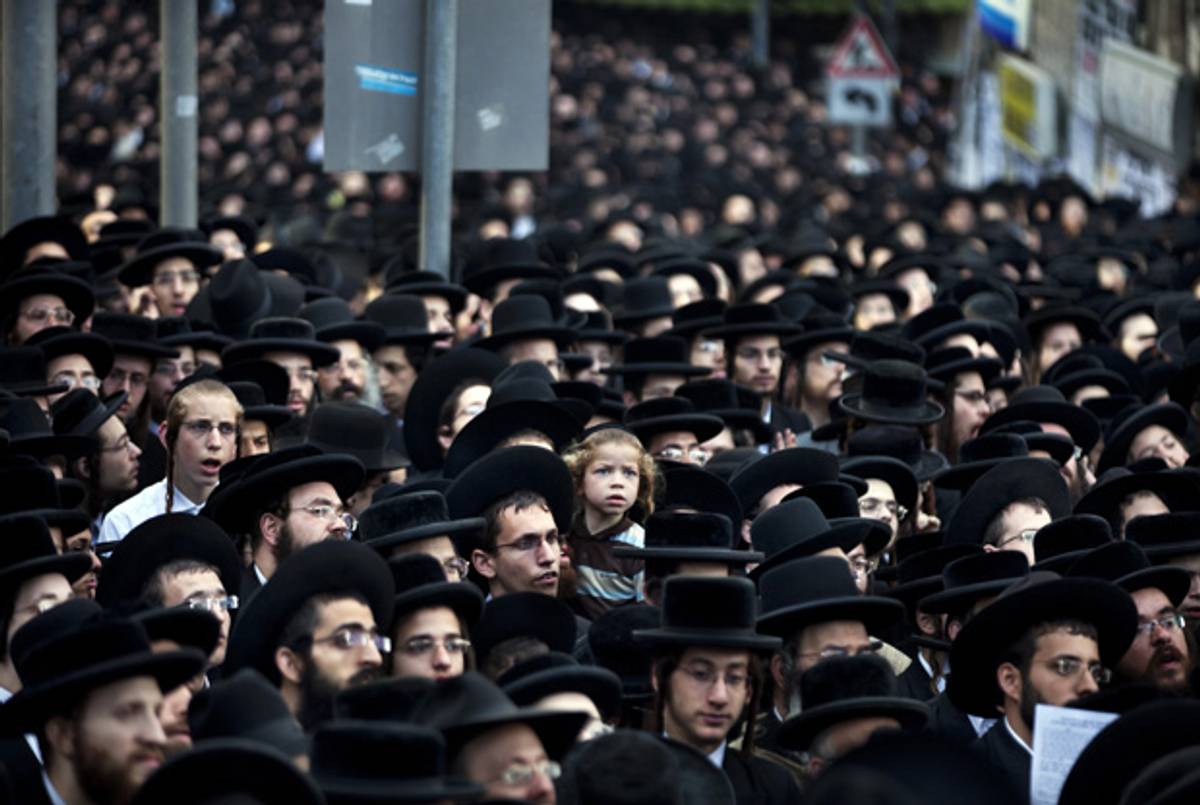 Israel’s Economy and Ultra-Orthodox Productivity: A Threat on the Cusp of Change?

Israel’s tech sector recently celebrated a series of successful IPOs of Israeli firms – perhaps most notable of which were ironSource and SentinelOne – on the Nasdaq and NYSE, for a total worth of USD 26 billion. And that is just the latest in a year of booming prosperity for ‘Silicon Wadi’, despite Covid-19’s hold on the global and local economy. Yet, while the economically central tech sector booms, a shadow will continue to hang over the Israeli economy as long as the Ultra-Orthodox sector – colloquially known as Haredis – fails to integrate into the job market.

The Ultra-Orthodox in Israel, although divided into various subgroups with no insignificant differences, can – for our purpose – be characterized as a minority that subscribes to a particularly strict observance of Orthodox Judaism. Importantly, the study of religious Jewish texts is especially central to the Haredi worldview; and in Israel, religious studies in the Haredi school system come at the expense of non-religious topics, such as mathematics and English.

The average birth rate in Israel stands slightly above 3, compared to 6.6 in the Haredi sector.

Currently, the Haredi sector in Israel makes up approximately 13% of the entire population. However, this sizable minority is expected to grow as a result of a higher-than-average birth rate amongst its population. The average birth rate in Israel stands slightly above 3, compared to 6.6 in the Haredi sector.[i] By 2045, it is predicted that it will constitute slightly more than a fifth of Israel’s population, at 22%, and by 2065, almost one in three Israelis will belong to the Ultra-Orthodox community.[ii]

While Haredis are bound to become a sizable part of the Israeli population, their contribution to the country’s economy remains limited, and their dependence on state funds higher. The average income of a Haredi family is 30% lower than that of a non-Haredi household and the rate of unemployment is significantly higher. Correspondingly, a Haredi family pays a third of the direct taxes paid by a non-Haredi household. Notably, a recent study noted that members of the community are increasingly joining the Israeli job market, but that the workforce productivity per capita is actually on the decline.[iii] A central reason for this is that Haredi education, because of its focus on religious studies, does not provide an adequate basis in ‘secular’ topics that would allow pursuing higher education and employment in better paid jobs.[iv]

A new familial model in which the man studies religious texts fulltime while the woman takes on herself the position of breadwinner has developed in the last two decades.

It should be noted that there is a significant difference between the integration of Ultra-Orthodox men and women in the workforce. A new familial model in which the man studies religious texts fulltime – a central Haredi aspiration – while the woman takes on herself the position of breadwinner has developed in the last two decades and contributed to the notable increase in working Haredi women, from 50% in 2003, to 79% in 2019. However, the productivity of Haredi women compared to the average Israeli woman remains low at 66% of the national average and is in decline, as mentioned above.[v]

Despite the rise in working Haredi men and women, the impact of unsuccessful integration remains significant. The low productivity of Ultra-Orthodox men alone costs the state 33 billion NIS, or some 2% of its GDP, as calculated by the Israel Democracy Institute.[vi]

The confluence of these three elements – low Haredi productivity, the community’s high reliance on state funds, and their projected demographic growth – has led some Israeli economists – such as Professor Omer Moav of Reichman University (formerly, the Interdisciplinary Center) – to point out to these dynamics as an existential threat to the country.[vii] Yet, two recent developments may work to bring about major change in the situation of the Ultra-Orthodox community in Israel.

The first, and less important one, is the increasing awareness of the cost of the divide with the Haredis. Throughout the pandemic, Haredis were perceived by many in the majority as less observant of the safety regulations.[viii] And indeed, throughout 2020, the Ultra-Orthodox sector led the charts in the number of positive Covid-19 tests. In accordance with that, an estimated 37% of Covid-19 patients in Israel were Haredis, almost three times their percentage in the population.[ix] Non-Haredi Israelis saw reports of mass Haredi events contrary to safety regulations occurring before one dose of the vaccine was administered and learned of the high number of cases in the sector.[x] Measures were taken in response to the spread of the pandemic – including nationwide lockdowns and markets’ and stores’ closure. These prices paid by the entire population led to the realization that the disconnect between the state and the Ultra-Orthodox, manifesting itself as a disregard towards governmental safety regulations and a corresponding increase in cases, demands a high price from the average Israeli.

The price of poor Haredi integration into Israeli society – most obviously exemplified by the Ultra-Orthodox refusal to serve in the Israeli military – was in the public’s awareness before, but the pandemic and its lockdowns forced the matter into the limelight in an unavoidable manner.

The creation of a new Israeli government, sworn in on June 13, does not include the Haredi parties, Shas and Yehadut Hatorah.

The second, and major reason, is the creation of a new Israeli government, sworn in on June 13, that does not include the Haredi parties, Shas and Yehadut Hatorah, an unusual situation in Israeli politics. In recent decades, the Haredi parties were the factor that tipped the scale in favour of a coalition, and thus, could use their kingmaker status to ensure that what they perceived as their community’s interest – i.e., maximizing state funding, such as that which contributes to the above mentioned 27% of an Ultra-Orthodox family’s income – were preserved.

The new government, which is not beholden to the Haredi parties’ agenda, is free to further policies that will contribute to Haredi employment and productivity. And it is not only free, but willing to do so. Already, Finance Minister Avigdor Liberman has decided to condition daycare subsidies on the employment – or pursuit of employment-minded education – of both parents, in an attempt to push Haredi men from their religious studies in yeshivas to the job market. When this exact policy was employed – along with other similar measures – in 2013, the number of employed Haredi men rose dramatically, from 44.5% to 51.2%.[xi]

The new government is also planning to lower the age of exemption from military service for Haredi men. At present, Haredi men who normally opt out of service in the army to continue their religious studies have to wait until they are 24 before they are officially exempt from service and can join the workforce. The measure is in place to ensure that young men that declare their wish to avoid conscription in order to study, do not instead work. However, it also creates a major obstacle in the way of young Ultra-Orthodox men who wish to seek employment at 24. Lowering the age of exemption in the past pushed an additional 5% of Haredi men into the workforce, and there is no reason not to expect a similar result if the government’s intentions are realized.[xii]

The current government could, in addition, push for a reform in Haredi education that would ensure children finish their school years with the fundamentals of knowledge needed to pursue gainful employment.

Of course, any government’s major policies are likely to only last as long as it is in power. And this current government coalition is built of unlikely partners – with Meretz party on the dovish left, and Yamina on the right – that its life expectancy fluctuates on a weekly basis, depending on the latest local event or oppositional challenge. However, it is important to note that the government was not only formed without including the Ultra-Orthodox, but it was also sworn in with the deadlock-breaking vote of an Israeli Arab party, Islamist Ra’am, or the United Arab List. This is noteworthy and might be influential in many ways, but it may prove a key development in the topic at hand for the following reason.

Israel’s coalitional system and large number of parties accrues disproportionate power to the ‘free agent’ of the election round, the party – big or small – that is comparatively free of ideological constraints, and able to choose its partners based on political boons. The two Haredi parties have routinely found themselves in this position, and because of that, in the past, Israeli politicians have been reluctant to act against the Haredi parties’ wishes. This, not only because of their power during ongoing coalitional negotiations, but because of their assured influence during the next coalitional negotiations. Anger the kingmaker, and you will have trouble finding your way to a seat next time around.

However, in the last round on March 23, a new decisive faction appeared. Ra’am and the Israeli Arab electorate at its back – as a result of a change of political climate within both the Jewish and Arab populations in Israel – not only became a part of the negotiations to form a coalition, but themselves enjoyed the status of kingmakers. It is uncertain that this new development in the position of the Israeli Arab electorate will become permanent. If it does, there will be two sectorial factions in Israeli politics that can hand the country’s aspiring leaders the support needed to form a government. In such a scenario, Israel will suddenly have two sectors that enjoy “kingmaker status”, and when you have two possible kingmakers, you, in fact, have none. If Israel’s policymakers realize this shift of political weight, they may push forward changes vital not only for Israel’s economy, but for its social cohesion.